The Circular Economy Monitor: An Outline 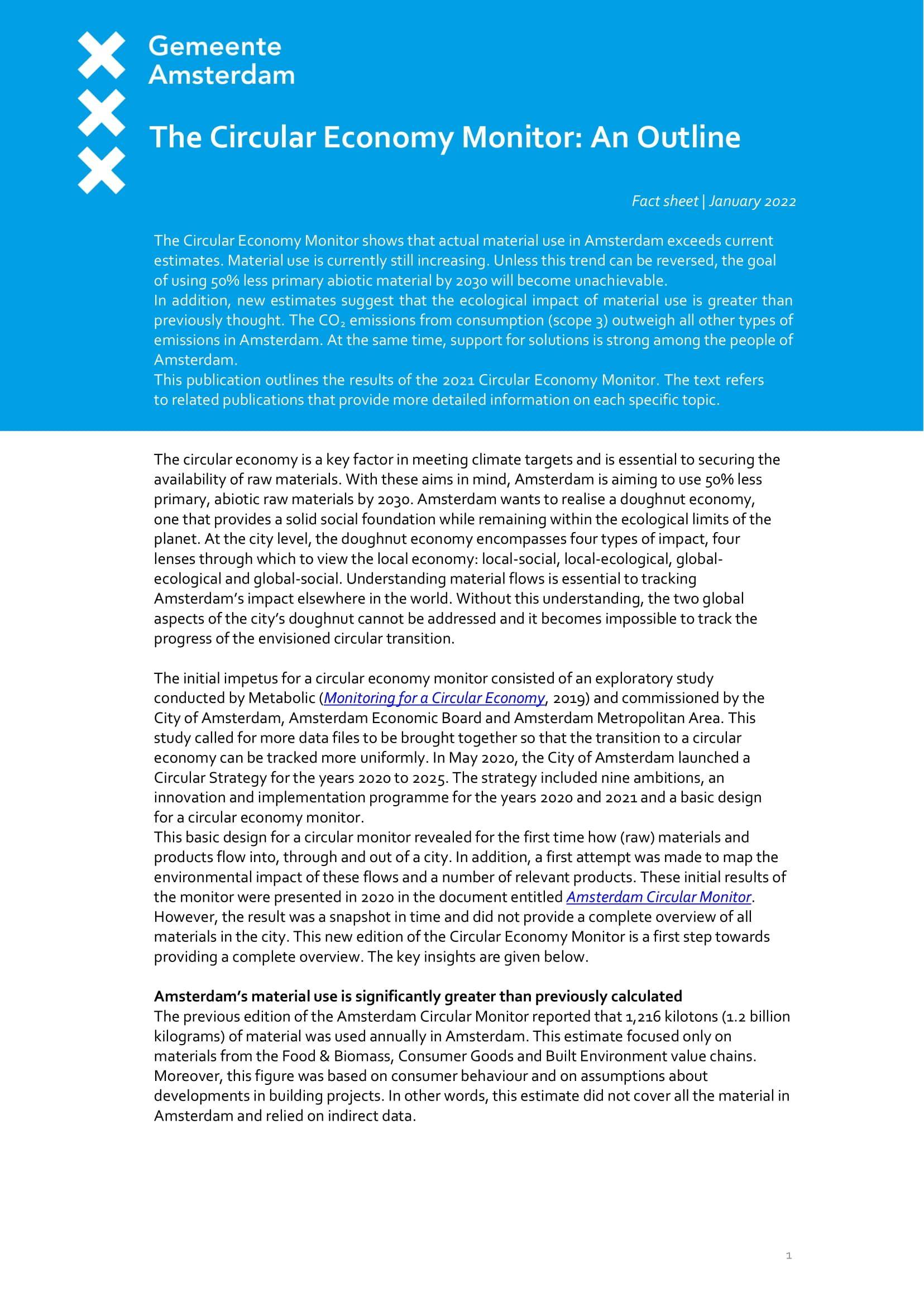 The Circular Economy Monitor shows that actual material use in Amsterdam is 61 times higher than previously thought. Material use is currently still increasing, and a trend reversal is needed to achieve the goal of using 50% less primary abiotic material by 2030. In addition, new estimates suggest that the ecological impact of material use is greater than previously thought. The CO2 emissions from consumption (scope 3) outweigh all other types of emissions in Amsterdam. At the same time, support for solutions is strong among the people of Amsterdam.

The circular economy is a key factor in meeting climate targets and is essential to securing the availability of raw materials. With these aims in mind, Amsterdam is aiming to use 50% less primary, abiotic raw materials by 2030. Amsterdam also wants to realise a doughnut economy, one that provides a solid social foundation while remaining within the ecological limits of the planet. Understanding material flows is essential to tracking Amsterdam’s impact elsewhere in the world.

Amsterdam’s material use is significantly greater than previously calculated 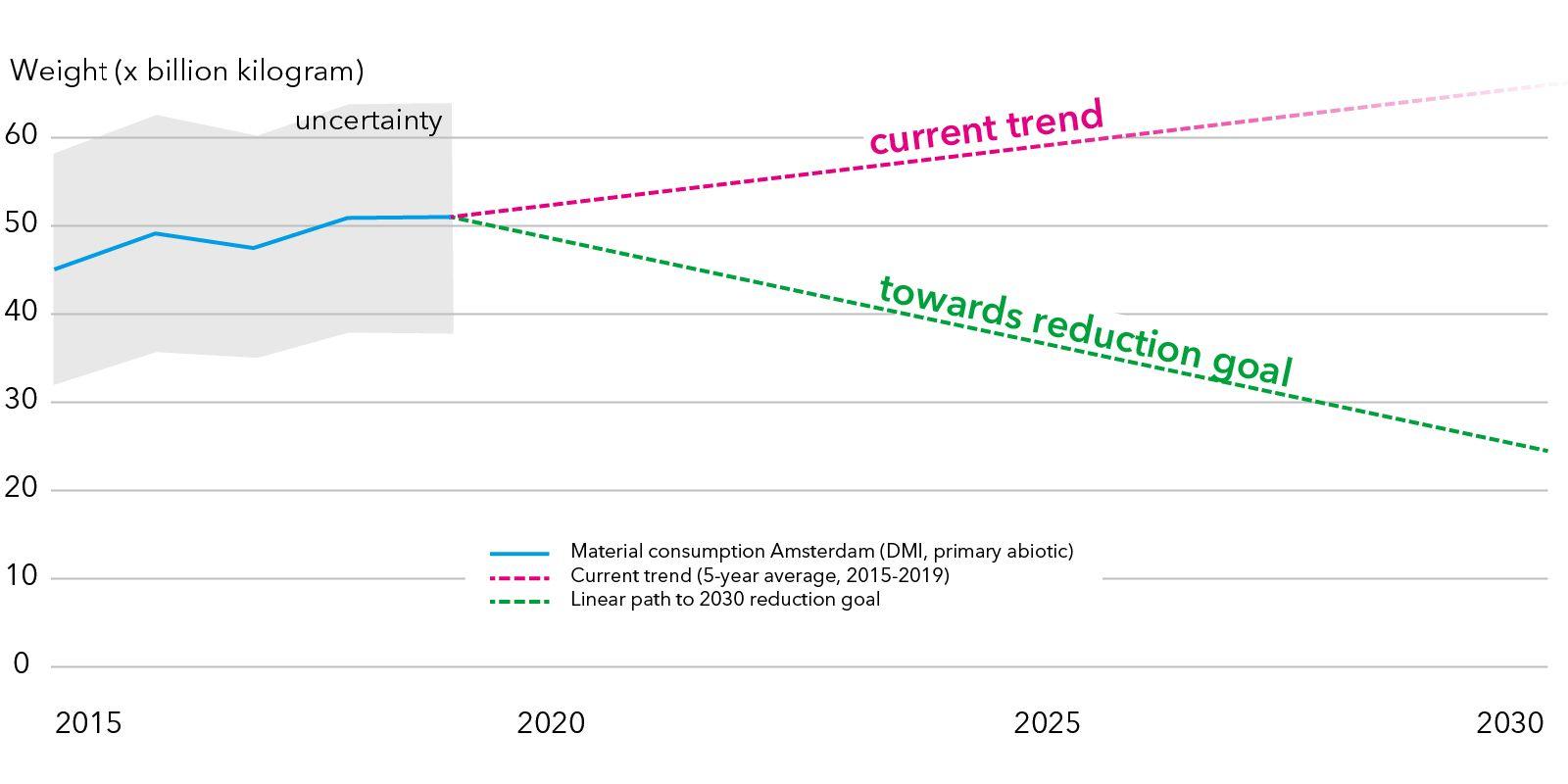 The city’s climate and ecological footprint is probably much larger

There are certain commodity flows that either make up a large proportion of the city’s material consumption or have a relatively high impact on the environment when they are consumed. These flows can serve as a starting point for determining the areas where the greatest impact can be made towards the goal of halving consumption and/or reducing the environmental impact. Below we identify the largest flows and indicate their weight (Figure 2). 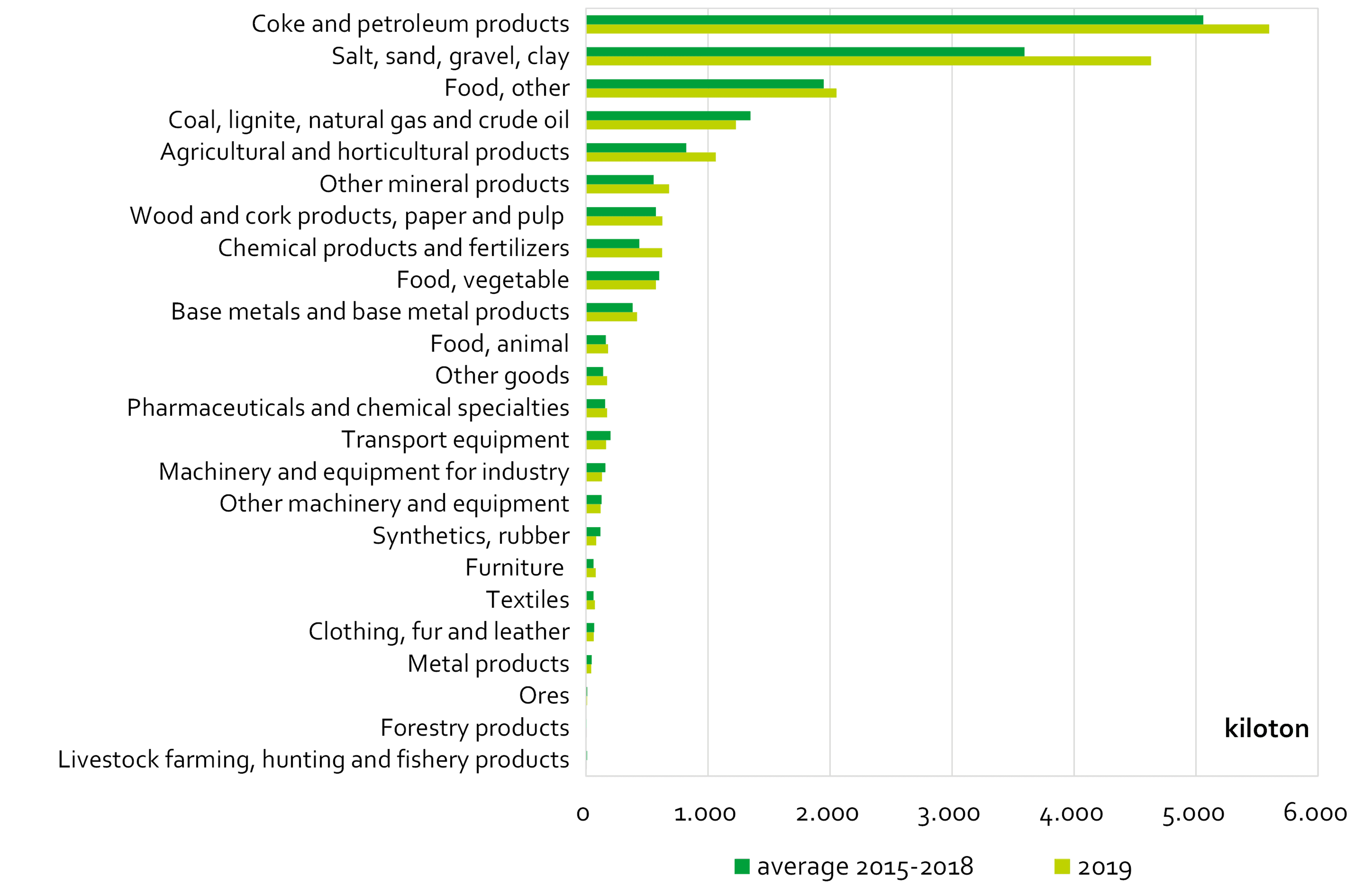 Bron: Statistics Netherlands/adapted by the Research, Information and Statistics Section

This figure shows all materials consumed in the city, not only the primary, abiotic materials like in the previous figure

Salt, sand, gravel and clay is another major material flow, accounting for a quarter of total material consumption. In addition, other minerals (such as glass, ceramics, cement, lime, plaster, tiles, bricks, concrete, asphalt, bitumen, graphite, non-metallic products, prefabricated structures) account for another four percent of total material consumption. These types of materials are mainly used by companies in the built environment. Waste analyses show that a large volume of construction and demolition waste is produced in Amsterdam and that its reuse could be more effective; only 33% of the soil and masonry from construction and demolition activities are recycled directly. This is well below the city’s recycling average of 54% of all waste. There is potential to be harnessed by using this waste to meet the city’s considerable need for construction material and in doing so to help achieve the goal of halving primary, abiotic material consumption through the reuse of building materials.

The categories Food, other and Agricultural and horticultural products also account for a large proportion of material consumption in Amsterdam. Food, other6 accounts for 11% of the total weight and Agricultural and horticultural products for 6%. These product groups are categorized as biotic material, which means they do not fall under the weight reduction target of halving the amount of material used.

Yet we also see these product groups at the top of the list when we look at environmental impact. The category Food, other represents an 11% share of the ECI of Amsterdam material use, with Agricultural and horticultural products accounting for a further 5%. A yet to be published study conducted by Material Economics for Amsterdam suggests that the city’s environmental impact in terms of food and organic flows can be reduced by changes that include transitioning to a plant-based diet and reducing food waste. If an additional 20% of Amsterdam residents switch to a plant-based diet this could make a difference of 16% to CO2 emissions by 2030. A recent survey of Amsterdam residents shows that the potential for change is certainly present in the city. In this survey, one-fifth said they would like to consume less dairy and 44% said they would like to eat less meat.

In addition, many people are concerned about the impact of human activity on nature and the environment in general. A recent survey of Amsterdam residents shows that over half of the respondents (55%) is very concerned about climate change and 84% said they think it is important to reduce their carbon footprint.